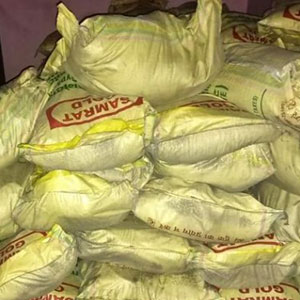 5,000 bags of urea seized too during godown raid

Amid the reports of DAP shortage in Punjab, over 1,800 fertilizer bags have been recovered from an unauthorized godown situated on the outskirts of Jalalabad on Thursday afternoon.

Hardev Singh, Chief Agriculture Officer, Fazilka, said after receiving a complaint, the officials accompanied by the police and some farmers raided an allegedly unauthorized godown on Kahnewala Road on Jalalabad outskirts. The godown belongs to a pesticide and fertilizer dealer in the town.

Gurwinder Singh Mannewala, vice-president, BKU Ugrahan, Fazilka unit, who led the farmers during the raid, alleged that around 2,000 bags of DAP stored illegally had been seized so far. He alleged the bags were to be sold in the black market during the dire shortage of fertilizers in the state.