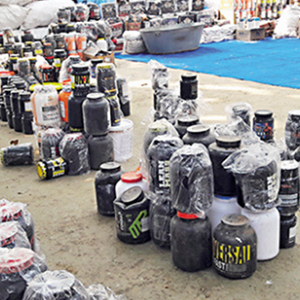 Noida: Three persons have been arrested for alleged production and sale of fake steroids and protein supplements following a raid on a Badalpur-based factory on Saturday.

The accused allegedly used counterfeit labels of top foreign companies and brands on the products, police said. Raw material worth Rs 2 crore and a machine used in the manufacture of the fake products have been seized, they added.
According to police, the main accused, Anuj Kumar Singh (30), a resident of Varanasi, holds a biotechnology degree from a Chennai institute and had worked in some pharma company for six years before starting the unit to manufacture fake products. The two other accused have been identified as Anuj’s brother-in-law Preetam Kumar alias Golu (24), from Chandauli, and Bacchan Kumar (25), a native of Bulandshahr.
Elamaran G, the ADCP of Greater Noida, said the police and drug inspection department received information about the factory and conducted a raid. “The three men were arrested from the spot. We also seized the raw materials, some sealed supplements, an XUV SOO and one scooter from their possession,” he said.
Police said the men purchased raw materials from two men, Praveen Dhankad and Somveer Dhankad, from Rewari in Haryana. The two men are currently on the run.