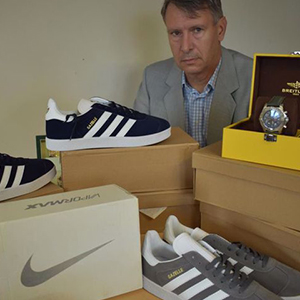 Some of the dodgy traders abandoned their stalls and goods

A stash of fake Nike, Adidas, Armani, Gucci and Dior clothes and Rolex watches have been seized during a raid on a Nuneaton car boot.

The sting was to target market traders selling counterfeit products and, as a result, some dodgy market traders abandoned their pitches and their stock to avoid being caught.

They also found 146 fake Rolex, Omega and Breitling watches, some of which were being sold for £150.

A large quantity of illegal cigarettes and hand-rolling tobacco and a number of suspected illegal airsoft guns were also found.

Speaking about the raid, councillor Andy Crump, cabinet member for community safety at Warwickshire County Council, said: “Cheap counterfeit cigarettes, often sold at half the price of genuine products, make it easier for young people to start smoking and more difficult for regular smokers to stop. These fakes undermine the work that Public Health and others are doing to reduce smoking rates.

“We are equally determined to crack down on the sale of counterfeit goods. Consumers may think they are getting a bargain, but fake products are usually very poor quality and can be dangerous. The sale of counterfeits also funds organised crime including drug dealing, human trafficking and prostitution and threatens the livelihoods of genuine traders.

“We will continue to work with our police partners and other agencies to stop the sale of illegal goods.”

Officers from Warwickshire Police’s Rural Crime Team and the Atherstone and Coleshill Safer Neighbourhood Teams were part of the operation with Trading Standards.
Carol Cotterill, rural crime team co-ordinator, said: “I’m really pleased with the outcome of this operation and we hope this latest seizure sends a clear message to all those trading in counterfeit goods.