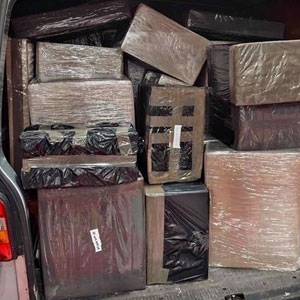 More than 650,000 smuggled and fake cigarettes have been found after officers raided an Oxfordshire home.

Trading standards officers working in a joint operation with Thames Valley Police, on November 29, raided the house in Banbury.

It resulted in the record haul of 680,380 smuggled and some suspected counterfeit cigarettes being seized.

Two mobile phones and a CCTV recorder were also seized and will be forensically examined.

A 37-year-old man was interviewed under caution at Banbury Police Station and, with the investigation ongoing, further suspects are expected to be interviewed.

Councillor Neil Fawcett, Oxfordshire County Council’s cabinet member for community services and safety, said: “Criminals dealing in illegal tobacco provide a cheap source of supply that can easily end up in the hands of young people whose developing lungs are particularly sensitive to the harm tobacco causes.

“It also encourages adults to carry on smoking, when giving up would dramatically improve their health and wealth.”

The illicit cigarettes are being stored at a secure undisclosed location.

The sting took place under Operation CeCe, a national trading standards initiative in partnership with HRMC, which is playing a significant role in disrupting the illicit trade and helping to take illegal tobacco products off the streets.

Jody Kerman, Oxfordshire County Council’s head of trading standards, said: “This is a quite remarkable seizure and one of the biggest ever achieved by trading standards anywhere in the UK. It’s staggering that such a huge quantity of illegal cigarettes was being stored within an otherwise normal residential property in our community.

“There is no such thing as a safe cigarette, but it is particularly concerning that suspected counterfeit products have been detected, both in terms of public health and fire safety.”