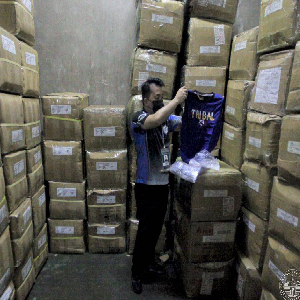 Some P7.4 billion worth of various fake items copied from signature brands were seized in Pasay City, the biggest haul of the Bureau of Customs (BOC) in recent years.

The goods were estimated to have a value of P7,429,638,000–the bureau’s biggest accomplishment resulting from a single operation to date.

Armed with a letter of authority and mission order issued by Customs Commissioner Rey Leonardo Guerrero, a team from the bureau, Armed Forces of the Philippines (AFP), and the Philippine Coast Guard (PCG) inspected the storage facility on July 28.

According to the BOC, the imported counterfeit items were seized for violation of Section 108 (f) of RA 10863 also known as the Customs Modernization and Tariff Act (CMTA) and RA 8293 otherwise known as the Intellectual Property Code of the Philippines.

On July 23, a P2.3-billion haul of fake signature brands and used clothing were also uncovered in a warehouse in Mayzan, Valenzuela.

“As the businesses strive to recover from the impact of COVID-19, the BOC remains committed in supporting legitimate brand owners against the proliferation of smuggled and counterfeit goods as part of its mandate of border protection,” Guerrero said.