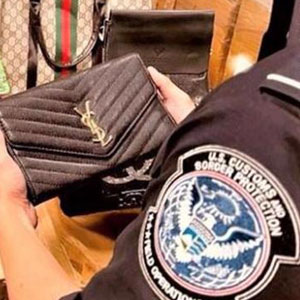 US customs officers have seized a container filled with more than $30 million worth of fake designer bags and cloths.

CBP officers found bags, shirts, and pants bearing counterfeit logos including Gucci and Louis Vuitton at the Los Angeles Seaport on November 9, the CPB said in a statement released December 2. The container of 13,586 items had been shipped from China and would have had a combined estimated recommended retail price of $30,437,775, it said. The CBP said that counterfeit goods had historically been sold in underground outlets and on illegitimate websites.”The rise of e-commerce offers a haven for criminals who are now able to hide behind seemingly legitimate listings on well-known websites. The sale of counterfeit commodities multiplies the illegal profits of smugglers and traffickers who reinvest the proceeds from such sales into further criminal enterprises,” said in its statement. The agency’s Director of Field Operations in Los Angeles, Carlos C. Martel, said that “substantial law enforcement resources” were deployed to keep fake goods out of US supply chains.