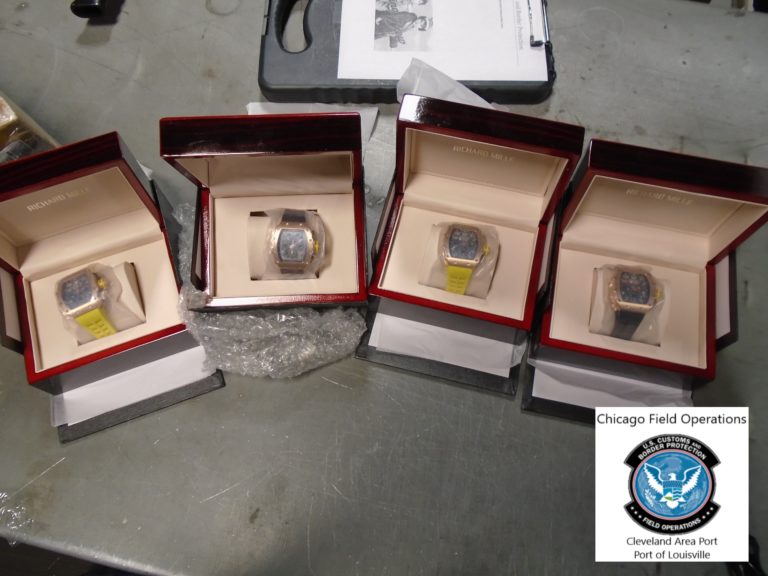 CBP officers inspected all these parcels to determine if the goods were admissible in accordance with CBP regulations.

The officers found a total of 2,168 designer watches determined to be counterfeit by CBP’s trade experts at the Centers of Excellence and Expertise. All the watches originated from Hong Kong  and were destined for several addresses across the U.S.

Two of the more notable seizures were destined for the same business in Flushing, New York.

Other seizures included 4 counterfeit Richard Mille watches that, if they were real, would have been worth $766,000 and another shipment contained 93 various counterfeit designer watches worth $3 million.

“Consumers should be aware that if a known high-value brand is being offered for an unusually low price, it could very well be fake. CBP encourages the use of reputable vendors for your valuable purchases,” said LaFonda Sutton-Burke, Director, Field Operations, Chicago. “Our officers are dedicated to preventing counterfeiters from defrauding consumers and legitimate businesses.”

CBP Trade protects the intellectual property rights of American businesses through an aggressive Intellectual Property Rights enforcement program, safeguarding them from unfair competition and use for malicious intent while upholding American innovation and ingenuity. Suspected violations can be reported to CBP here.

Every year, CBP seizes millions of counterfeit goods from countries around the world as part of its mission to protect U.S. businesses and consumers. These goods include fake versions of popular products, such as smartphones and related accessories, electronics, apparel, shoes, cosmetics, and high-end luxury goods, as well as goods posing significant health and safety concerns, such as counterfeit pharmaceuticals, bicycle and motorcycle helmets, medical devices, supplements and other consumables.

The total estimated value of the seized goods, had they been genuine, was nearly $1.3 billion.