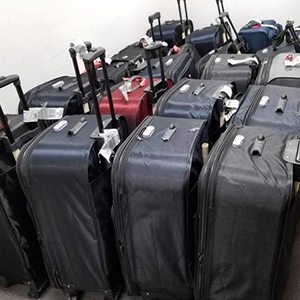 STERLING, Va. – Shipments with a voluminous amount of counterfeit consumer goods are usually transported in maritime cargo, so it was a bit surprising when Customs and Border Protection (CBP) officers encountered two women who arrived at Washington Dulles International Airport recently from Qatar with 806 counterfeit items packed into 21 checked suitcases.