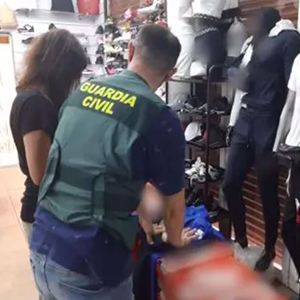 FAKE GOODS including clothing, footwear and luxury goods have been seized in an cross-country operation in Spain and Portugal

The haul, worth some €16.5 million, was collected from 13 raids across both countries, with the swoops only ending last week, on July 21.

Spain’s Guardia Civil, Portugal’s National Guard (Guarda Nacional Republicana) were joined by Europol in dismantling the organised crime groups (OCG’s) involved.
In all, eight people were arrested for the production and trafficking of counterfeit clothing, accessories and luxury goods.  Another 33 suspects were reported to various judicial authorities.Items seized included more than 60,000 fake items of ‘branded’ clothing, leather accessories and shoes. Printing plates and 212 kg of different ‘branded’ metal labels were found, €24,000 in cash, electronic equipment and documents linking the detained with the crimes.
Investigation started in 2019 when a group representing well-known clothing brands issued a statement.The document reported the sale of counterfeit goods in the Spanish towns of La Jonquera and Els Límits, close to the French-Spanish border.
The Guardia Civil discovered an OCG that was importing already-made counterfeit items from Portugal.Other non-branded products such as handbags had been imported from China, to which different counterfeit labels were later added.
All these items were then sold as genuine in different shops throughout the area. Europol supported the work of the Spanish and Portuguese with analysis and operational coordination.