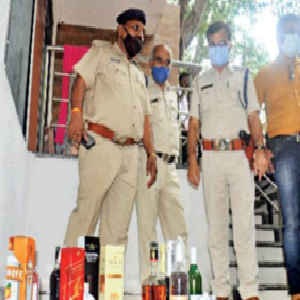 Cops seize Illicit liquor during a raid in Indore on Saturday

INDORE: Continuing crackdown against bootleggers, the Indore Excise department on Saturday carried out inspections at four places and seized illicit liquor in large quantities worth around Rs3 lakh.

INDORE: Continuing crackdown against bootleggers, the Indore Excise department on Saturday carried out inspections at four places and seized illicit liquor in large quantities worth around Rs3 lakh.
A day after the excise department arrested one Hemant Sharma and seized illicit liquor, including country-made and Indian made foreign liquor (I MFL) worth around Rs7 lakh from his residence, the accused revealed involvement of other persons in the crime.
“Acting on Sharma’s information, the team raided at one Sunil Notwani’s house situated in Sindhi Colony and seized as many as 12 bottles of different liquor brands,” said assistant excise commissioner Raj Narayan Soni, adding that while a search for Sunil was on, the team has arrested his brother Shiv Notwani and interrogating him.
Later, the team raided the residence of Suresh Keswani in Sindhi Colony and seized 2325 litres of foreign liquor of different brands, while in the search carried out at the residences ofJiya Pariyani and Nitin Kadra, the team seized around a dozen bottles of foreign brands.
“We have seized illicit liquor worth around Rs3 lakh from four places while Shiv, Suresh, Jiya and Nitin along with Sharma are being interrogated,” Soni said, adding that as per the Madhya Pradesh Excise Act, an individualcan keep four bottles of liquor and 12 bottles of beer.
According to the assistant excise commissioner, Notwani was working for Sharma and used to deliver illicit liquor to customers at their residences.
Taking cognisance of the recent hooch deaths , the excise departmeriso collected samples from bars and sent them for forensic examination.