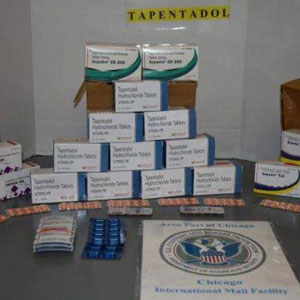 During Fiscal Year 2021, which ran from October

CHICAGO–CBP’s International Mail Facility (IMF) at O’Hare processes millions of packages a year, however, many of the packages that arrive from overseas contain illegal products. CBP officers work day and night to ensure arriving packages are safe, protecting our communities.

Chicago CBP saw a 10% increase in drug seizures this year. This year the number one seized narcotic in Chicago was Tapentadol, a schedule II opioid. This drug came in various doses and was mostly being shipped from India, destined for addresses across the United States. CBP nationally seized 2,399 shipments, a 605% increase from last year. The second highest seizure within the Chicago IMF was Carisoprodol, a schedule IV drug used to treat musculoskeletal pain, seizures increased of this drug by 105% from last year. CBP seized 2,193 shipments of this drug.

These shipments mostly came into the United States from India. Carisoprodol has serious side effects including addiction and seizures. Psilocybin Mushrooms finished in third, as CBP seized 439 shipments of these magic mushrooms, known for their hallucinogenic effects.

There are several steps that consumers can take to protect themselves when shopping online. Purchase goods only from reputable retailers and be wary of third-party vendors. Check seller reviews and verify there is a working phone number and address for the seller, in case you have questions about the legitimacy of a product.