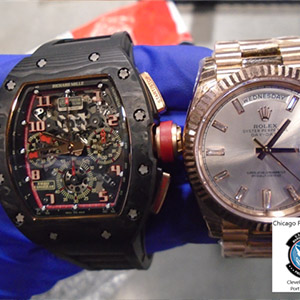 LOUISVILLE, Ky— One of the most common counterfeited items that is seized by U.S. Customs and Border Protection (CBP) officers are watches. On September 10, CBP officers in Louisville seized 2,168 counterfeit designer watches with a MSRP of $57.84 million.

The enforcement efforts did not stop there, on October 21, CBP officers Louisville inspected seven parcels to determine if the goods were admissible in accordance with CBP regulations and found a total of 54 designer watches. CBP’s trade experts at the Centers of Excellence and Expertise determined that all the watches were counterfeit. The watches originated from Hong Kong and Turkey and were destined for residential addresses in Florida and Michigan.

“This is a significant seizure for CBP, but unfortunately, CBP officers see counterfeit shipments like this every day,” said LaFonda Sutton-Burke, Director, Field Operations-Chicago. “Counterfeit goods like this, come in by the truck-load on a nightly basis all across the nation threatening businesses and conning the consumer.”