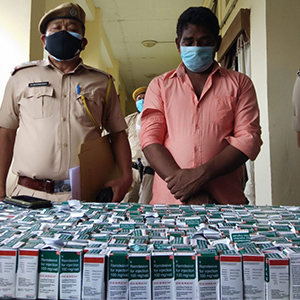 The seized item, which is believed to be fake, looks bigger when compared to the medicine procured by state authority.

Imphal: A Bihar resident was nabbed by the Imphal East Police Team for illegal possession of 441 pieces of DESREM (Remdesivir 100 mg) injection, which are suspected to be fake.

According to Imphal East SP N Herojit Singh, the medicine suspected to be fake was seized yesterday when a team led by ASI Aktar Hussain searched the New Checkon Area near Tribal Market, under Imphal East District, Manipur.

The nabbed person has been identified as Lalo Sah (55), son of late Bauku Sah of Sasam Village ,Samastipur District, under Hassanpur PS, Bihar.

Upon interrogation, the accused was unable to produce any relevant document for the said medicine that he possessed.

Upon formal enquiry with the State Drug Controller, the Directorate of Health Services found various discrepancies while comparing the seized tablets with genuine medicines of the same company. It is important to point out that no privateRe

The seized item, which is believed to be fake, looks bigger when compared to the medicine procured by state authority. However, it has the same print price of Rs 4,400 and the medicine is said to be in high demand in neighbouring Myanmar and can sell for double the print price.

According to SP, the arrested Lalo Sah (55) landed in Imphal from Guwahati in an Air Asia flight on July 31, with another person suspected to be head of a fake medicine racket.