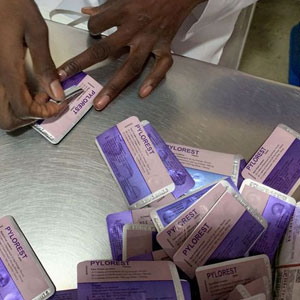 LAGOS (Reuters) – Startups in Nigeria are helping fight counterfeit pharmaceutical drugs in Africa’s most populous nation, where the prevalence rate of fake drugs is higher than the global average 10% and contributes to several deaths annually.

The most counterfeited are drugs for anti-malaria, pain, and antibiotics, according to the National Agency for Food and Drug Administration and Control (NAFDAC).

To fight the flood of fake pills, the agency, in partnership with the startups has created stickers with unique codes that manufacturers and distributors can attach to boxes and sachets of pills. Consumers can then use apps on their phones to scan the code and confirm their authenticity.

“They’ve (manufacturers) also been able to discover things like side effects, potential side effects their product could have on consumers based on what people say about their product,” the company’s founder Dare Odumade told Reuters.

NAFDAC’s director of investigation and enforcement directorate Kingsley Ejiofor said the agency had in the past three years seized 2 trillion naira ($4.8 billion) worth of counterfeit drugs.

He said tracking apps were boosting the confidence of consumers.

“We currently have about 200 containers of counterfeit medicine at the ports scheduled for destruction. Just imagine the people that could have died as a result of the use of such products,” Ejiofor said, adding that China and India were the major sources of fake medicines.