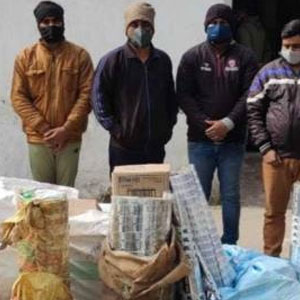 Face-2 Kotwali police have busted a factory manufacturing fake shampoo in the name of a branded company and arrested four accused including the factory owner.

The arrested accused have been identified as Manish, Monu, and Yogesh, residents of Kakrala, residing in Sector-80. The police have recovered a huge quantity of fake shampoo pouches, equipment to make it, etc. from the accused.

Additional DCP Central Noida Ilamaran G. It is said that the police had received information that there is a way to make counterfeit shampoos etc. in a factory running in the name of a branded company in the Kotwali area. On Thursday night, on the basis of the information, the police team raided a company located in Sector-80. During this, the police team has recovered fake shampoo pouches, shampoos, fake packaging items, cans bottles, etc. being made in the name of Hindustan Unilever Limited Company on the spot. The police had arrested Manish, Monu, a resident of Muzaffarnagar, Yogesh, a resident of Bulandshahr, who worked here.

In this case, Sudhanshu alias Siddhant Bhargava, resident of Ghaziabad, the owner of the factory, has also been arrested by the police team on Friday. Police have recovered ten boxes of doves, six boxes of clinic plus fake shampoo pouches, three plastic drums filled with chemicals, and other packaging items from the accused. During interrogation, the police came to know that the accused were making and selling shampoo in the markets for a long time.

These people used to make fake shampoos in the name of different companies. Action is being taken against the arrested accused by registering a report under other sections including copyright.