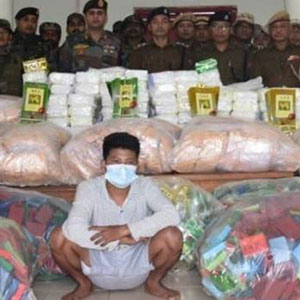 Drugs worth over Rs 500 crore seized in Manipur town, one arrested

The seized drugs include heroin powder weighing approximately 54 kg worth Rs 108 crore and 154 kg of methamphetamine worth Rs 400 crore.

A combined team of Manipur Police and Assam Rifles personnel reportedly seized drugs worth over Rs 500 crore from a house at Moreh town in Tengnoupal district on Monday. An alleged drug trafficker of Myanmarese origin was arrested from the spot. The seized drugs include heroin powder weighing approximately 54 kg worth Rs 108 crore and 154 kg of methamphetamine worth Rs 400 crore.

Police said the seizure was made on Monday afternoon from a house situated at Moreh (ward number 3) during a joint operation by Moreh police and 43 Assam Rifles personnel. Sources said that the house is owned by a lady who is married to a Chinese man, and the couple is possibly in Mandalay at the moment. Superintendent of Police Th Vikramjit Singh said, “Based on specific information collected by 43 Assam Rifles personnel and Tengnoupal police, we came to know that the house was being used for stocking, repackaging and redistribution of narcotics substances which were being smuggled in large quantities from Myanmar. The teams deployed were keeping a close watch on the house and waiting for the opportune moment to carry out the raid.” Singh further said that a person on a two-wheeler, who had left the house at around 2 pm on Monday, was stopped by the security forces. Around 20 large boxes containing suspected narcotics substances were seized from him, he added. The person identified himself as Monkhai, 19, the son of late Thang En Mang of Khampat in Myanmar. “The seizure corroborated the information we had about the target location. Thereafter, a search was conducted in the house. We found 3,716 soap cases containing suspected heroin powder and 152 packets of suspected crystal meth (methamphetamine). The team also recovered plastic packaging materials,” said the SR The arrested person and the seized drugs have been handed over to the officer-in-charge of Moreh Police Station and a probe has been started.

Moreh in Manipur’s Tengnoupal district is the last Indian town along the India-Myanmar border. It is about 110 km away from Imphal. Due to the porous international border, Moreh is often used as a transit point for smuggling illegal items like gold, drugs, and weapons.