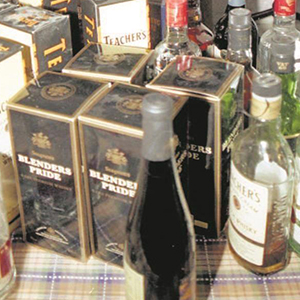 2 held with 3,959 cartons of spurious liquor

The arrested accused have been identified as Krishan Kumar, a truck driver aged around 45 and a resident of Haibowal village in Ludhiana, and Divay Khanna, a resident of Motiaz Royal City, Zirakpur.

The consignment was brought from Uttarakhand. It had a seal of the Uttarakhand Excise Department. The seal on the bottles mentioned that the liquor was meant for sale in Chandigarh only. The police have also seized three trucks.

Divulging details, Mohali SSP Navjot Singh Mahal said a special drive was initiated against anti-social elements, criminals and drug peddlers in view of the forthcoming Assembly elections. After receiving a tip-off, a police team, under the supervision of SP (City) Akashdeep Singh Aulakh and OSP (City-1) Gursher Singh Sandhu, laid a naka in Phase 6, Mohali, on October 29. A police team, headed by Phase 6 police post in-charge Sub-Inspector Kulwant Singh, signalled a commercial vehicle, bearing registration number HR-68-B-0606, to stop for checking. The vehicle was ferrying vegetables and fruits to Amritsar. During the checking of the vehicle, 520 cases of fake ‘Naina’ whisky (for sale in Chandigarh only having seal of the Uttarakhand excise) were recovered. The cases were concealed beneath the crates of fruits and vegetables.