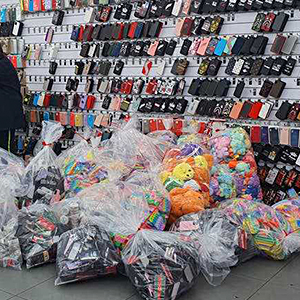 police have seized an “astonishing” collection of fake designer goods and illegal products in pre-Christmas raids on Oxford Street.

More than 17,500 items were confiscated by officers after four stores were raided on the popular shopping street on Thursday night.

Police confiscated two bags of foodstuffs that had more than the allowed legal limit of THC – the main psychoactive compound in cannabis – while other staff seized 4,000 items being sold by an unregistered food business operator.

Some 2,500 souvenirs were taken from unregistered businesses and illegal street traders.

Westminster City Council cabinet member for communities and regeneration, Heather Acton, said: “Oxford Street is the nation’s high street, our shoppers should be able to trust the products they are buying in the city are as described ‘on the tin’.