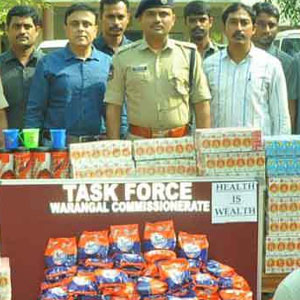 The arrested have been identified as Katiriya Avinash of Feel colony, Hyderabad, Vajrapu Narasimha Murthy of Brahmin Street, Hanamkonda, and Yenaganti Rakesh of Gopalaswamy temple area in Warangal.

They have seized Rs 1,56,313 worth of counterfeit products of Boost Jars, Surf excel packets, Mosquito repellent (liquid bottles) from them. The police have also seized a van and three mobile phones.

“On interrogation, the accused revealed that they along with their team members from Hyderabad have been preparing the counterfeit products for renowned companies at Hyderabad and distributing it to various places of the State especially targeting the rural areas where it will be difficult for the people to recognize the fake products and selling the same,” the Task Force police said, and added that the accused were jeopardizing the health of the people who are purchasing those products believing that they are the genuine one as Boost is consumed by the children for growth and energy.

Hence, people are requested to purchase genuine products at authorized outlets only.

Further, the companies concerned are also requested to provide the necessary information pertaining to the genuineness of their products by way of publishing it in the newspapers and telecasting through electronic media so as to see that the public purchase the genuine products.