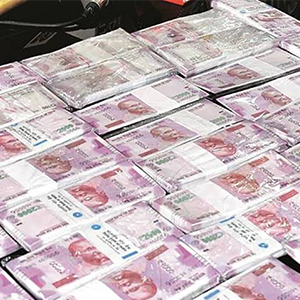 POLICE CLAIMED to have busted an alleged counterfeit currency racket in the course of an investigation at multiple places in Maharashtra and Gujarat, spread over three weeks, with the arrest of six persons. Police said they seized fake notes of Rs 2,000 and Rs 500 denomination, which came to a total face value of over Rs 32 lakh.

According to police, the probe started on June 23, when working on a tip-off, a team from Pimpri-Chinchwad police laid a trap near a graveyard in Nigdi. Police said a man, identified as Gorakh Pawar (30), was detained. From him, 50 notes of Rs 2,000 denomination were seized and these later turned out to be counterfeit during an examination by bank officials, police added. Pawar, a resident of Bhalwani in Pandharpur, was subsequently placed under arrest.

As the probe advanced, police teams were sent to Gujarat where they arrested Raju alias Ranjeetsingh Parmar (38), Jitendrakumar Patel (26) and Kirankumar Patel (38), all residents of Banaskantha in Gujarat, with the last arrest being made on July 11.

Pimpri-Chinchwad police commissioner Krishna Prakash said the elaborate investigation was on for around three weeks, and 1,402 fake notes of Rs 2,000 denomination and 929 notes of Rs 500 denomination were seized taking the total face value to Rs 32,67,000. Police said they had also seized computers, printers and a car from the suspects.