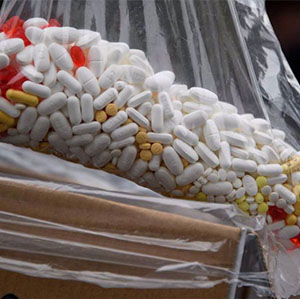 US warns of fake pills that contain deadly fentanyl

More than 9.5 million counterfeit pills were seized so far this year, more than the last two years combined.

WASHINGTON (AFP) – US authorities on Monday (Sept 27) warned Americans to not buy prescription pills online because they increasingly include lethal doses of fentanyl and methamphetamine.

The Drug Enforcement Administration (DEA) said the advice applied to counterfeit medicine made to look like real Oxycontin, Vicodin and Xanax or Adderall.

“Counterfeit pills that contain these dangerous and extremely addictive drugs are more lethal and more accessible than ever before,” said DEA administrator Anne Milgram in a statement.

“In fact, DEA lab analyses reveal that two out of every five fake pills with fentanyl contain a potentially lethal dose.”

The rare public advisory – the first since 2015 – comes as US drug overdose deaths soared to 93,000 last year, the highest ever level.

Fentanyl, the synthetic opioid most commonly found in counterfeit pills, is the primary driver of the rise, the DEA said.

Overdoses involving methamphetamine, increasingly found to be pressed into counterfeit tablets, are another factor.

More than 9.5 million counterfeit pills were seized so far this year, more than the last two years combined.

The vast majority were produced in Mexico, with China supplying chemicals for manufacturing fentanyl in Mexico.