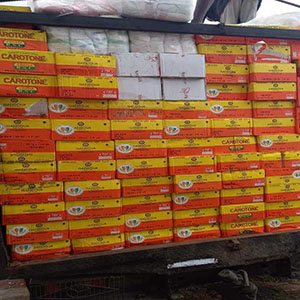 In a press statement by the public relations officer, FOU Zone C, Jerry Attah, he said the contrabands intercepted between July and August in the zone are worth N120billion.

Attah, in the statement said the customs area controller, Compt. Yusuf Lawal, listed other contraband seized to include 130 bags of 50kg foreign parboiled rice valued at N5.4milion and 2,181 cartons of foreign cosmetic products without  National Agency for Food and Drugs Administration and Control (NAFDAC), registration numbers valued at N76million intercepted along the Okada/ Benin express way.

According to the comptroller, the cosmetic products included 457 cartons of simple sensitive skin expert; 790 cartons of facial wash, 232 cartons of Carotone Cream, 574 cartons of various brands of cosmetics and 128 cartons of Revlon Almay Godess Gloss.

The comptroller who urged Nigerians to be wary of fake and smuggled products said that they are not only hazardous to human health but also to the economy of Nigeria.

He added that his men and officers are fully prepared and equipped to combat all nefarious activities of smugglers especially with the festive ember months by the corner.

He thanked sister agencies as well as the media and the Comptroller-General, Col. Hameed Ibrahim Ali for their hollistic support to the Service and pledged to continously checkmate the activities of  smugglers in line with his constitutional mandate so as to reduce smuggling in the zone to its barest minimum.

“We urge Nigerians to confirm the quality of a product before purchasing it for use because so many medicinal and cosmetic products are being smuggled into the country without a NAFDAC number.

“Those who use non NAFDAC certified cosmetic products stand the risk of skin cancer just as those who consume antimalarial drugs without a NAFDAC number are only experimenting with their lives.

“Our men and officers are fully prepared to face smugglers head-on especially during the ember months in line with our mandate ; we will leave no stone unturned,” he said.

He further said that the importation of foreign rice is against Federal Government’s agricultural policies and warned that smugglers will never have a filled day.

He urged Nigerians to cooperate with the Service as it continues to block all leakages, thwart antics of smugglers and sanitize the country irrespective of whose ox is gored.