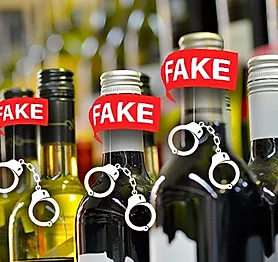 In the New Mandi area of Muzaffarnagar in Uttar Pradesh, the police and excise team raided a warehouse located on Roorkee Road in a joint operation and busted the fake liquor and arrested two accused from there.

City Superintendent of Police Satpal Antil told journalists that two people are still absconding in this racket whose efforts are being made to arrest them. Hundreds of liters of rectified, alcohol, other chemicals, and other items have been recovered from the arrested accused.

He said that the police got information that some people were making fake liquor in a warehouse on Roorkee road. Police and Excise team raided the warehouse.
Police arrested Sonu’s son Suraj Mal resident Amit Vihar Kukda from the spot and recovered 8500 liters of rectified, 140 drums empty, 10 Choti cans, alcohol, the paint used in brewing, other chemicals, and equipment.